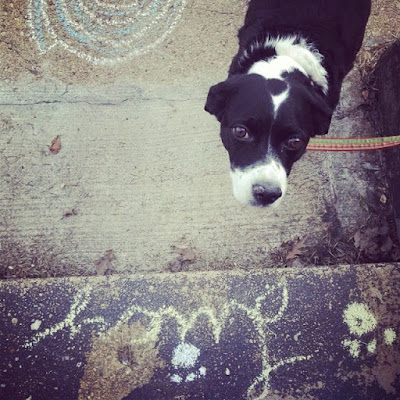 For the first few years, she woke us up every morning by standing at the side of the bed and breathing in our faces and making huffing noises until we woke up. During trips to the Outer Banks, Lucy would begin whining at 6 a.m. so that we could take her back to the beach to go swimming in the ocean. She would wear herself out in the sun and surf and would conk out at night, only to wake us at the crack of dawn the next morning. Eventually, she began to sleep in later than us, but she still attacked her days with unbridled joy.


She moved with us from the condo, to a townhouse, and eventually our home on a small lake in Michigan. For eleven years, she greeted us every time we came home, including one day seven years ago when we brought our first daughter home from the hospital. Allison and I thought we were nervous about bringing our newborn into our lives, but Lucy, who was not much of a shedder, lost a ton of fur that day. But within a day or two, we knew that Lucy knew she simply had one more person to love. When we brought our second daughter home a few years later, Lucy was an old pro. Her only concern was finding a quiet spot to sleep when our youngest cried through the night for most of the first year of her life.


I was in law school when we got Lucy, and she got me out of the house every day. She took my mind off studying for the bar. She was energy, but she was also comfort. Lucy sensed minor pain, like when she would rush over to see what was wrong if our daughters cried after stubbing a toe or experiencing a bad day at school.

But Lucy provided the greatest comfort in the most trying moments. Allison had two miscarriages between the births of our two daughters. Lucy knew something was wrong and comforted both of us, but especially Allison, both times. Allison recalls, "Lucy stayed on the couch with me all day, and she let me soak her fur with tears." When my dad died last year, same thing. Lucy sensed something was wrong and was there to comfort me in silence, when all I needed was silence.


She also protected us. Lucy barked and growled at everyone who came to the door, but visitors immediately became her new best friend when we invited them in. But she also protected us from the unknown. Although she loved people, she had an intuition and unease about certain strangers, sometimes before we even noticed them. A few times when Allison walked her at night, Lucy growled at men acting strangely and getting too close to them.

More than anything, Lucy brought laughter and joy to our lives. One Christmas she ate a candy cane and its plastic wrapper, and she would've gotten away with the crime if not for a tiny piece of candy cane stuck to the fur near her mouth. She would chase a fly around our house for hours until she was able to leap and catch it, although it usually took her only a few minutes since she was such an incredible athlete. She jumped up in the air to catch snowflakes, causing strangers to stop, smile, and forget about their worries for a moment. We even found out that she really did hate horses, so much that she would growl and bark at horse statues.

When Lucy would swim with a ball or stick and her mouth or sprint recklessly around our house, her breaths made a snorting sound that were reminiscent of the wild boar that she really was. When she slept, she snored just like Allison and our daughters. I remember waking at night when our girls were newborns and wondering if the snorting snores were coming from Allison, Lucy, or the bassinet. She wanted to play with every child she met because she never stopped being a puppy herself, until a brain tumor ravaged her body and mind.

She was given maybe two to three weeks to live, but Lucy, as always, refused to yield. She lived another four months. We debated when to let her go because even with the steroids and tumor turning her into a shadow of her former self, Lucy still would have bursts of energy that convinced us to hold on a little longer. We finally made our decision to euthanize her when we felt that the enthusiasm that defined our dog was no longer there.

We dreaded telling our older daughter because she had not known life without Lucy and is old enough to understand the finality of death. We let her play with Lucy in the yard one last time, and Lucy ambled after a tennis ball a few more times, fulfilling her last duty to our daughter.

And so Allison and I found ourselves on blanket, staring at a source of comfort as the veterinarian gave her the drugs that would end her life. We stroked Lucy's fur and tried to comfort her as she breathed her last breaths. The vet left us alone with Lucy, and we held and comforted each other until we returned to our car, not knowing how to drive home without a companion that had been with us for eleven years.

The first few days were hard on me, but now, when I think of Lucy, I don't have as many tears, just lots of smiles. I don't think of the old dog that didn't seem to take joy in anything, even play. Instead, I remembered a dog who tried to catch every snowflake falling from the sky and would not give up until I dragged her inside. And I smile and am thankful that she hated horses.

Though we may have given her a good life, she gave us a better life. 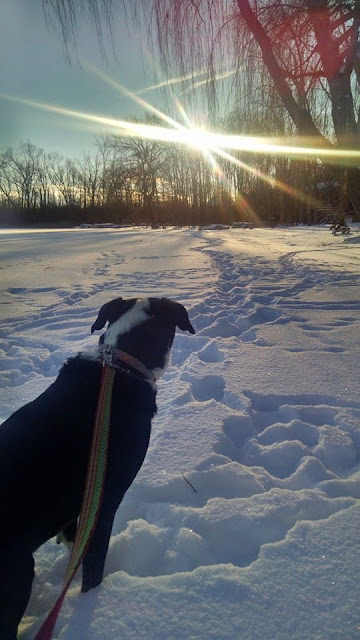 It would be impossible to write about Lucy without acknowledging those who made her life with us possible and those who cared for her. Homeward Trails in the D.C. area is a great rescue group. They saved Lucy and brought her to us. The veterinarians and amazing staff at Alpine Veterinary Hospital in Cabin John, MD, actually made Lucy excited about going to the vet (and they offer discounts to animals from rescue groups). We also relied on the advice of our friend, Dr. Jennifer Henderson, who is a veterinarian at Near North Animal Hospital in Chicago. Although she did not treat Lucy, Jennifer's counsel helped us make our final decision. Plus, Lucy loved when she visited, and she's a great vet--read her Yelp reviews. Our Michigan veterinarian, Dr. Sarah Middleton, and the staff of Walled Lake Veterinary Hospital took great care of Lucy during her final year and brought her, and us, peace in Lucy's final moments. Finally, Dr. Trevor Moore at Animal Neurology & MRI Center in Commerce, MI, gave us Lucy's brain tumor diagnosis. He did an excellent job explaining our options and answering questions. We thank all of these people and organizations for giving Lucy a better life.